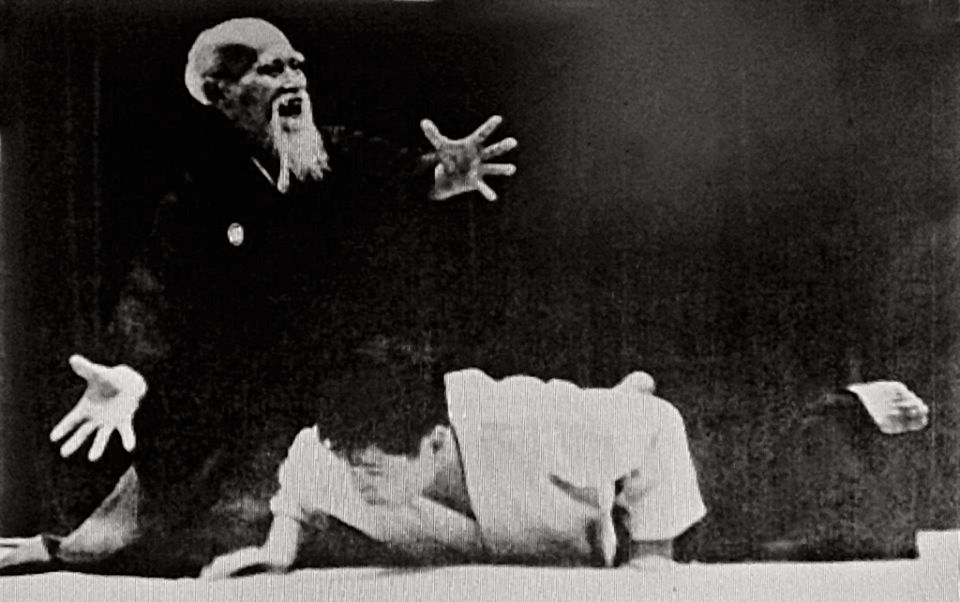 “Aiki to wa Ai nari”, Aikido is love, said the Founder. And it is undeniable that this ideal of compassion in Aikido is one of its fundamental characteristics. Consequently, does this mean that the techniques of Aikido are meant to control an opponent without hurting him?

A recurrent debate in Aikido dojos: Should one call the attacker who receives the technique by the term uke or aite? The distinction is subtle, and I can understand that one might be interested in the ramifications of this choice. But Osensei used the word teki 敵 – ENEMY! A word that can be found in the original editions of his books, Budo and Budo Renshu. The use of this word has also been confirmed to me personally by several of his direct students.

Ueshiba Morihei knew war. He trained spies, and men of the terrible Kempeitai, the secret imperial military police. As high as his ideals were, he never deluded his students whose lives could depend on their skill and attitude in the face of danger. This is why while his ideal of peace was that Aikido should never be used, his technical teaching was, throughout time, based on the notions of irimi and atemi.

Aikido is not made to destroy

“Ueshiba Morihei changed, transforming his Aikido into an art of peace after the war. He modified the hard and violent techniques of Aikijutsu into supple movements that allow to control an enemy without hurting him.” Really? Like the symbolism of the pleats of the hakama, the rules about its color, and the idea that it served to hide the movements of the feet, these contentions are nothing but urban legends that lack any ground.

Is Aikijutsu hard and violent? In reality, it is the highest level of Daito ryu, the school from which Aikido originated. A level at which the adept has achieved the greatest looseness. The pre and post-war changes? Completely trivial. A video titled “A Comparison of Pre-War and Post-War Aikido” presents photos and videos of before and after the war. These allow to ascertain without so much as a shadow of a doubt that Ueshiba Morihei executed the techniques in the same way. What he practiced after the war was the same he had taught the armed forces during the conflict. Furthermore Mochizuki Hiroo told me that he was “knocked off” several times by one of Osensei’s atemis in the 50s when he was an teenager!

The disciples of Osensei all agree that Osensei repeated again and again “Aikido is irimi and atemi.” Irimi, enter into/with the body; atemi, strike. But how to reconcile these direct and destructive notions with the compassion so dear to the Founder?

“If you are compassionate, then violence is allowed to defend yourself.” Dalai Lama, March 2009

I believe that these words of the Dalai Lama could have been uttered by Ueshiba Morihei. And that the reason he did not say them is, that to him and his audience this was obvious. Because to understand the message of Osensei, one has to put his teaching within its cultural and its historical context. Osensei was born in a time among people who went through the conflict of the Bakumatsu. During his live, his country would undergo multiple conflicts, from the russo-japanese war in which he participated, to the Second World War. The people of this era knew the nature of violence, and they did not entertain any romantic illusion about the subject. It was clear to everyone that the purpose of Aikido was for it never to be used, but if it had to be to preserve one’s life or that of another, it would be in the most decisive manner. By entering, striking, cutting, piercing.

So Aikido is as efficient as MMA?

Yes. But within ITS context. In reality Aikido is by nature much more barbaric than MMA. Its techniques are simply poorly understood, dulled, and above all, above all, its practitioners train very, very, VERY little. And that is what makes the essential difference. Quantity and intensity of training. All you need to understand this is to watch classes of both. If Aikido was practiced with its original spirit and with intensity, it would be terrifying. Much more dangerous than MMA, boxing or Brasilian Jujitsu. In fact it was promoted as the superior self-defense method in the 50s, in Japan as well as the West. It is simply the illusions, the sloth, and the attachment to the past of the teachers of this art that have lead to it being considered a wellness practice.

An interesting YouTube video titled “UFC Fighters Experience Marine Corps Martial Arts” shows UFC fighters facing combat instructors of the Marines. Put into the situation, they are ALL massacred within seconds. In a ring, during a ritual fight, they are terrifying. In a survival combat they are victims, prey. And do not be mistaken, it is for survival combat that Ueshiba Morihei prepared the members of the secret service and other military forces.

Aikido is designed to eliminate one’s adversary the fastest possible, IF THERE IS NO OTHER CHOICE. Because as the saying goes, violence is rarely the solution. But when it is… it is the only one. Osensei who knew war, and who had many students who had been at the front, had no illusions on the matter, and never allowed himself to “sell dreams”. Contrary to the majority of contemporary teachers.

MMA and Aikido do not have the same objective. MMA is based on a ritualized confrontation to develop qualities in its adepts. Its techniques are made to fight, compete. Not to kill or survive like those of the Koryus or Aikido. Aikido aims at developing our human potential by training warrior techniques that one wishes never having to use because of their destructiveness.

Now just to be clear, although I believe that the technical nature of Aikido is one of brutal efficiency, with the investment of the average practitioner being far below what is common in most other disciplines, and in particular ritual combat sports, the results are by no means comparable. Because people who work intensively on techniques that are less dangerous are always more effective than dilettantes practicing lethal techniques. But this should not be an excuse to hide behind a sentimental discourse that has never been supported by reality, neither in the past nor today.

A technically updated Aikido practiced in its original spirit would allow the practicioners in search of it to reach a very high level of martial efficiency. Moreover, requiring the development of one’s physical capacities, and above all one’s inner and outher consciousness, it would benefit all the practicioners by its higher demands.

Translation with permission by Peter Schenke